California provides an exemption for Private Retirement Plans, including - almost uniquely among states - plans that are not tax-qualified. The exemption arises under CCP § 704.115. This creates the potential to use the exemption for asset protection planning, if properly done. However, it is that last phrase "if properly done" which causes considerable angst for technical planners, but unfortunately little for the numerous promoters who hawk them as a cure-all "bulletproof" asset protection device (which they are not).

The California Private Retirement Plan is a planning vehicle that is exempt by statute, more specifically California Code of Civil Procedure § 704.115(a)(1) and (b) which provides: 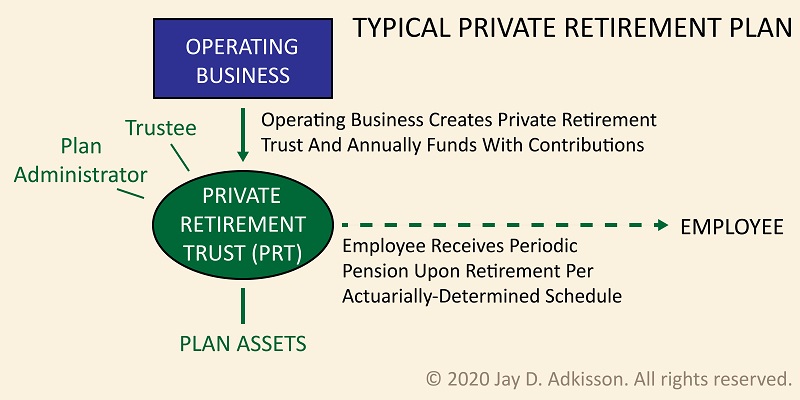 A California Private Retirement Plan ("PRP") typically involves an agreement between an employer and an employee, whereby the employer will set up a Private Retirement Trust ("PRT") for the benefit of the employee (or some or all employees, depending on the type of plan), and will regularly fund the Trust according to some schedule. When the specified retirement event occurs, the Trust will then begin to make distributions to the employee, also according to schedule. There are several ways for creditors to successfully bust these plans, not the least of which being, as amply demonstrated by the case-law:

Private retirement plans are not easy to design because of the tax and ERISA issues that can arise from such plans, which usually requires drafting by a skilled tax attorney who also has some ERISA experience.

One more thing: The legislative history of 704.115 shows that this section was adopted in 1982, became effective in 1983, and the first opinion regarding the statute was handed down in 1985 in the federal bankruptcy case of In re Daniel. The point is that CCP § 704.115 is hardly anything like new law, but instead has been around in substantially the same form for over 30 years. It is only in the last few years, however, that private retirement plans have become a hot-button flavor-of-the-day for asset protection planners, which is something attributed far more to aggressive marketing by promoters'' than the statute or the wealth of decisional law on the subject.

The more realistic view of private retirement plans is that they can be an important piece of an asset protection plan when conservatively utilized, but should only be that -- a subsidiary piece of the plan, and not the central piece de resistance of a plan. As the case law demonstrates, overloading a private retirement plan just for creditor protection is an inherently bad idea. Yet, this is exactly what is being widely marketed today. Caveat emptor!